Represent Australia at WEG or the Olympics

Liz Halliday-Sharp is a unique sportswoman. Originally from California, she is now primarily based in Ocala, Florida, and Lexington, Kentucky, and has dedicated her life to the pursuit of two international sporting careers.

On the one hand, she is an international three-day eventer who has competed successfully at CCI5* level, while on the other she’s formerly a professional racing driver in sportscar and GT endurance disciplines. Liz is also an experienced TV broadcaster and presenter and has worked with numerous different channels and companies in both the US and Europe.

For the past twenty years, Liz split her time between the UK and USA which helped her to create a successful business producing and selling horses, as well as providing an opportunity to compete and train in both Europe and America. Now she is lucky to be based full-time in the United States, with two equestrian bases in the USA: Blue Fox Farm in Lexington, Kentucky, and Horsepower Equestrian in Ocala, Florida.

Over the last few years, Liz has enjoyed wins and top results up to the CCI5* level of Eventing competition across both continents. Those results have helped her to become an established member of the US Equestrian Eventing High Performance Training List for many years. She has also appeared on multiple Nation’s Cup Teams and was the reserve for Team USA at both the 2018 World Equestrian Games and 2019 Pan American Games. With a strong team of horses in the barn, Liz now has her sights set fully on the Olympic Games in Tokyo for 2021 and beyond.

Liz is an experienced TV broadcaster and presenter and has worked with numerous channels and reality shows over the years.

If I have a fall with a number bib, I must immediately get rid of that pinney number so I don’t fixate on that. 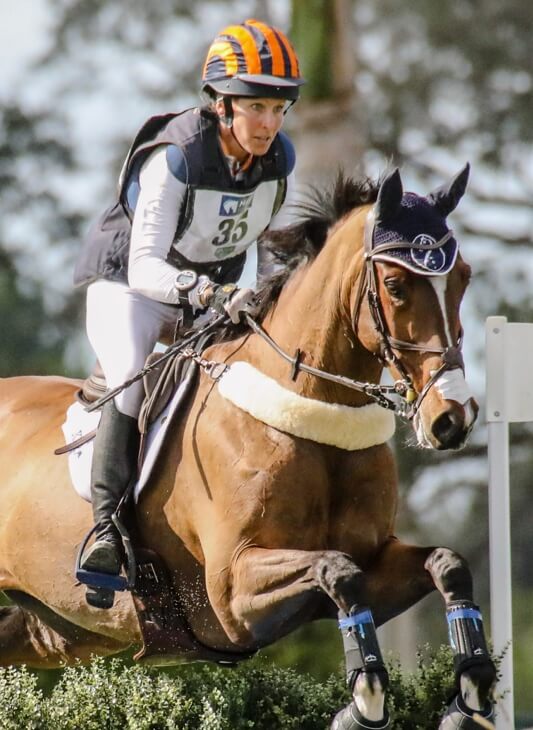